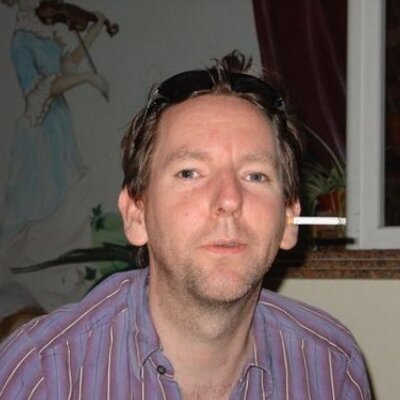 “No one is born hating another person because of the colour of his skin, or his background, or his religion. People must learn to hate, and if they can learn to hate, they can be taught to love, for love comes more naturally to the human heart than its opposite.” – Nelson Mandela

What would you say if you had someone come online and write more than 1,500 vicious and maliciously false things about you, your friends, your family and your business over the space of 18 months? What if that person also stirred up a whole group of people to encourage daily assaults on you and the business you’d been working on for years to build? You’d be excused for thinking that person would probably be someone like a jilted lover, vengeful ex-business partner, a vindictive ex-client, a jealous friend or maybe even a toxic family member with a personal vendetta against you.

Well, what I’ve just described are the real-life actions from someone that I and we at Lighthouse International Group have never met! These are the actions of an extremely hateful, resentful and very unwell person. His name is Jon Breen and this post is to warn you about him and those with a similarly unhealthy pathology. Deep down he knows his behaviour is destructive and so we understand why he feels the need to post anonymously about those he pursues relentlessly online and offline.

Mr Breen is a tragic case of someone desperately looking for connection, even if the only way he can do that is by stirring up hatred amongst others against a common enemy (real or dark fantasy!)

Mr Breen refuses to meet Mr Waugh or any of us despite numerous invites because he knows then that his dark fantasy will be blown apart because we are nothing like he and his cohorts imagine!

Why We Need To Call Out Acts Of Constructive Sabotage

Acts of constructive sabotage similar to Jon Breen’s are killing lives and livelihoods without a hair on the head being touched. Children, teenagers and adults are seeking therapy, even taking their own lives because of the hatred they have directed their way. The pathology of a constructive saboteur is sadistic-psychopathic in the respect that it’s rooted in Schadenfreude, whereby pleasure is derived another person’s misfortune.

Are you a sadistic-psychopathic? It’s easy to self diagnose you know! Just ask your this question Do you enjoy revenge? Do you get gratification and fulfilment out of causing others pain and suffering through vengeful words and acts? Do you experience vengeful glee? Enjoyment?

This is classic troll pathology that’s based on the dark triad. From my and our experience we have seen this dark pathology in spades from Jon Breen and others over the last 18 months. He expresses great satisfaction in his efforts to break down others. For instance, in December 2021 Paul Waugh was interviewed by ITV News to speak about online anonymity and in April 2022, Jon Breen took great pleasure to publish his attempts to sabotage this relationship where he used the Daily Mail article as a weapon to discredit us where previous attempts had failed. 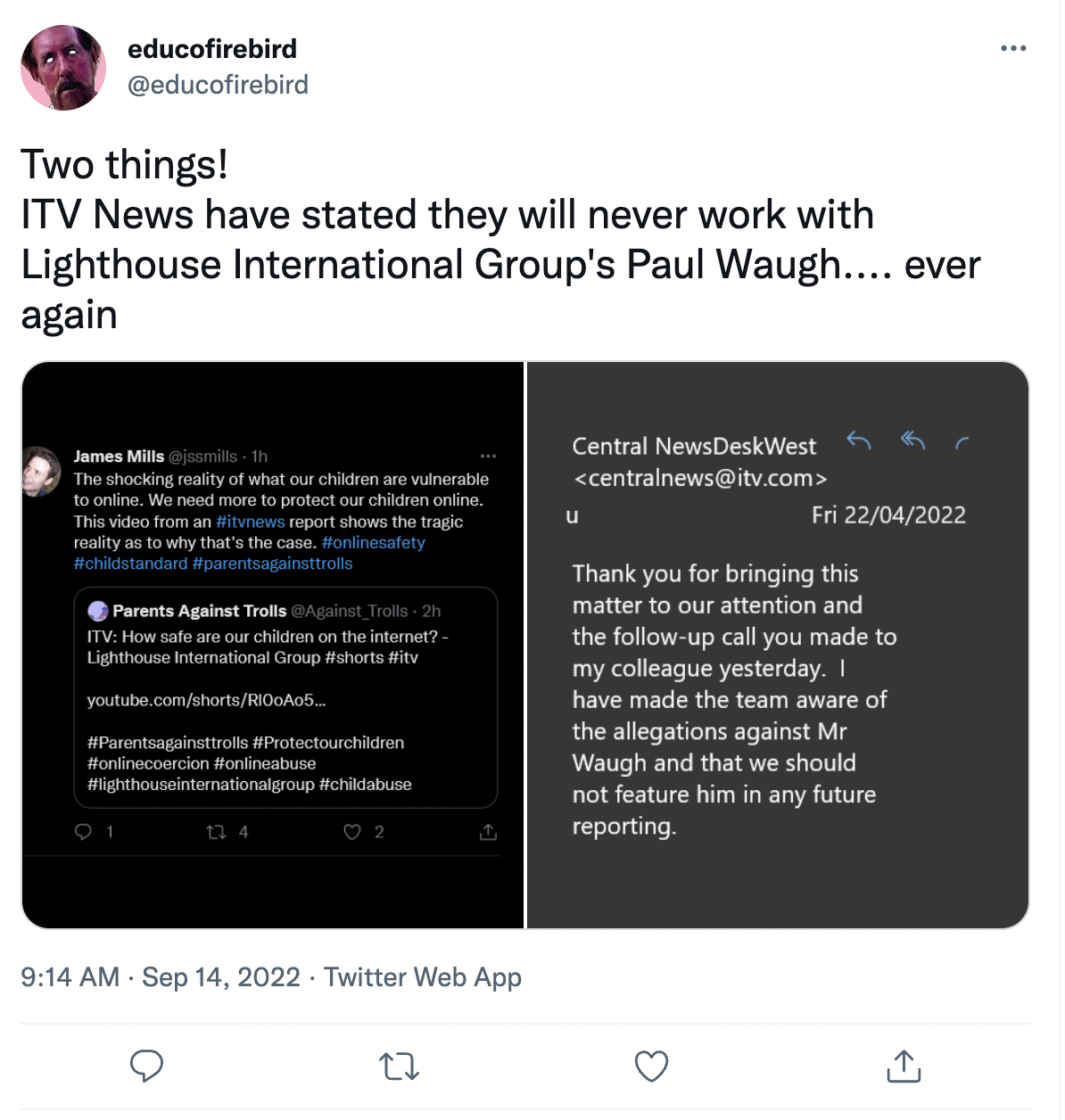 In the space of less than 6 months, Jon Breen has tweeted links to Daily Mail articles on Lighthouse International Group more than 475 times in a deliberate attempt to destroy our reputation. He’s even created more than 10 anti-Lighthouse Twitter accounts! In this post we’re featuring tweets from two of these accounts; @educofirebird and @toseetosee1, as these are accounts that Jon Breen has attacked us most persistently and maliciously with.

Speaking personally I have firmly, but respectfully, requested him to stop this harassing behaviour in excess of 50 times. Yet Jon Breen persists with the accusation that I’m somehow harassing him and being totalitarian. The reality is that he simply does not like me standing up to him and so as a result I’ve seen attacks personally directed my way online as well as apparently being reported to the police and other authorities.

The Reaction To Jon Breen From Others

Because of his attacks on us, in May 2022 we were sent the link to a website (www.jonbreen.info) which is self-evidently produced by someone else who has been viciously attacked and harassed by Mr Breen. Clearly they had reached the point where they decided enough was enough and dedicated a whole site to him and his obsessive behaviour towards others.

Although it is one-sided and set up with the intent to destroy Mr Breen’s reputation, what’s written about Mr Breen is highly consistent with his obsessive behaviour online. We are dealing with someone who has clearly been damaged to the extent that they have no concept of what is healthy, caring and respectful behaviour. It was the circulation of this site that led to his co-conspirators against Lighthouse dropping their association with him unceremoniously because they found the content to be true while not realising how aligned their behaviour is to that of Mr Breen. They used him and then turned on him, just like they did with us. We have been there Mr Breen, they will turn on each other too, watch this space… They all claimed to love us at one point which we have on recording ready to be shared in court.

It was extremely uncomfortable and inconvenient for the likes of Richard Thomas and Joanne Holmes to see the character of someone who had been pivotal to their malicious smear campaign against Lighthouse International Group. He was deemed surplus to requirements. On a deeper level it would be too painful to recognise that the same hateful pathology lies within them as demonstrated by their actions since leaving Lighthouse.

The below tweets show the level of hatred contained within Jon Breen through recent attacks on Paul Waugh, again someone Mr Breen has never actually met or spoken to.

The Remaining Supporters Of Jon Breen

Of those involved in the attacks on Lighthouse International Group (covert and overt), it is only Rani Singh who maintains any form of online communication as demonstrated by the mutual support on Twitter. 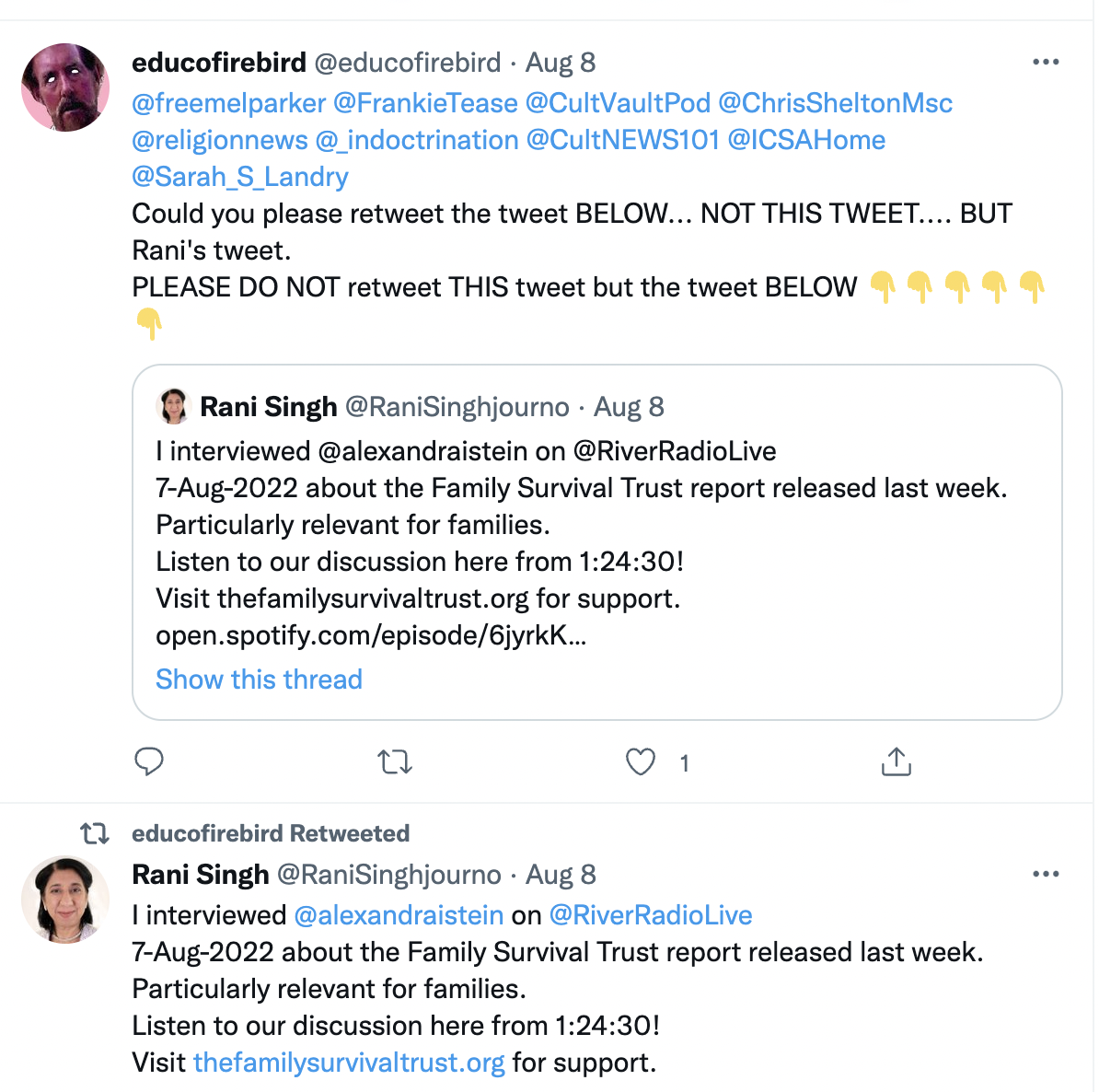 However, as we’ve seen with our assailants over the last 18 months, those coming together in the name of hatred and destruction will, in time, turn on each other. We wait to see whether Jon Breen will turn on Rani Singh or vice versa.

Our Compassion For Jon Breen

Based on his online presence, Mr Breen is evidently a clever, resourceful and persistent individual based on some of the things he writes. Yet his hatred and resentment often lead to him writing incredibly childish and foolish things in his bid to attack, demonise, vilify and punish others. Tragically this has an impact on his ability to connect with other people in a healthy way. So we have good reason to believe that Mr Breen is a lonely individual who craves the healthy attention and human connection that he appears to have not received as a child.

We’ve known Jon Breen’s identity for some time now, sensitive to his deep fear of his cover being blown. We have tried to reason with him in various ways. However, he has simply thrown this back in our faces with all sorts of insults to boot. The bottom line is that Jon Breen’s behaviour does not constitute that of a healthy, loving, caring and empathic human being and certainly not someone whose genuine motive is seeking reasonable and fair accountability for others.

Nothing Mr Breen says or writes about us acknowledges anything positive or praiseworthy, it is 100% about how terrible and awful and dangerous we are to the point of labelling us as some form of destructive cult. Really? If we are such evil, nasty and wicked people, as he claims us to be, then he needs to meet us and hold us accountable; get his lawyers, police, journalists and ‘cult experts’ involved, the more the merrier! We’re open to this and even welcome and encourage such a thing, cults simply aren’t like that! We ask Jon Breen to stop being a coward, to stand behind his convictions, take responsibility and work this out; to find a fair outcome for him, for us and all those vulnerable people we want to see helped in the world.

When we going to meet Jon Breen? Come on be a sport! You have spent so much time over me and us over the last year we have got to be in your interests to meet. I will be nice I promise! 😀 don’t be scared! Love you x

May God bless you and have mercy on you Jon Breen. We continue to pray for you. We know you said that you are a self-proclaimed New Born Atheist, but it is very clear where this nihilistic, meaningless, loveless worldview has left you. We encourage you to look to Christ as healing from the trauma you have suffered can only come through Him.

Empowering conscientious people to identify and overcome the obstacles to their God given human potential! God Willing 🙏😀..

Ps it’s cheaper and quicker if the predatory Troll has posted from their phone rather than via a router with VPN onto a platform like Reddit etc..! ..