The purpose of sharing the facts below and holding Richard Thomas accountable is in the sincere hope that he stops his campaign of persecution towards Lighthouse and reconciles. It is our greatest wish this would happen, but after 18 months we have taken the difficult decision to share this information. 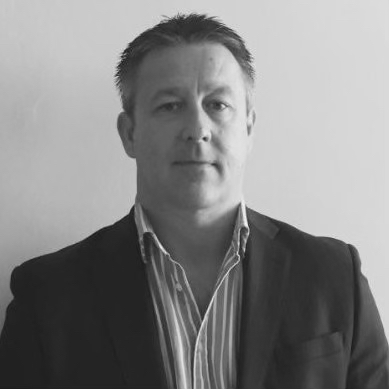 The Case of Richard Thomas: Overview

This page is based on the contents of the Daily Mail article about Lighthouse International Group published on 19th April 2022. With and through this article, one of the named article sources; Richard Thomas, made 7 serious accusations and defamatory statements against Lighthouse International Group, its Head Mentor Paul Waugh as well as his former mentor, Shaun Cooper.

The purpose here is to present and understand the truth behind these false accusations. It is our high-level response to each of the key false accusations and defamatory statements that Richard Thomas has made as a source for the Daily Mail article. Each part of our response can be backed up with specific facts, dates and crucial background information for context which can all be presented in court.

If Richard Thomas truly believes and stands by his claims, then we invite him to provide consent for us to publish the relevant evidence openly before the need to go to court.

Our motivation is to stop Richard Thomas causing more damage to himself and others. Richard Thomas is a family man who works for Kibo Commerce and our hope is that through being held firmly accountable, he will stop his self-destructive behaviour for his sake and for his children’s sake. He continues to write disparaging comments on Reddit rather than to have the honour to speak with us and work through the issues he has; whether in a court of law or otherwise.

Through Richard Thomas’s role as a moderator on an anti-Lighthouse subreddit, there have been hundreds of hate crime comments online (including racial and religious slurs) that he is endorsing and supporting. We hope he is able to let go of the hatred and resentment directed our way to the point he can have a mature, adult conversation with us to resolve this situation. In doing so, we see the potential for Richard Thomas to help others to handle disagreements with dignity and respect.

On the Reddit destructive sabotage site aimed against us at Lighthouse moderated by Richard Thomas of the company @KiboCommerce there are now hundreds of posts by his cohorts that are anti religious hate crime against our faith and #Christianity including racism! 1/2

The police are now taking serious and decisive action on this as we speak irrelevant of what Thomas knows or does not know in relation to it. It will unfortunately come as a shock. What a tragedy he and his destructive and hateful cohorts cannot resolve issues with decency 🙏2/2

All of these facts can be backed up and proven with tangible evidence held in private communications and recordings (made with mutual consent) that will be released with Mr Thomas’s permission, or will be presented in court.

“Lighthouse leaders branded an e-commerce accounts manager’s wife ‘destructive’ and wanted to sue her after she supported her husband’s decision to quit the group.” 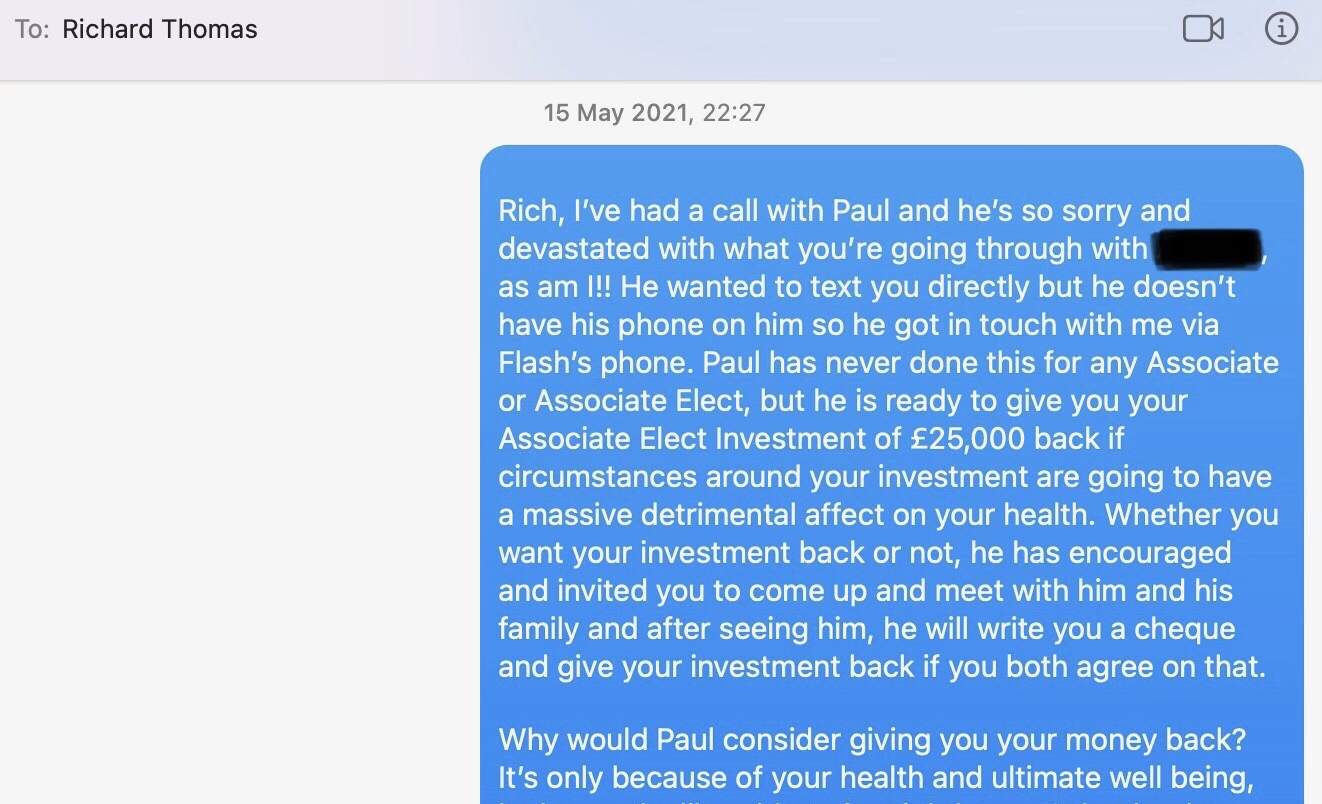 ‘It took me months and months to actually do this because there was no actual financial agreement,’ he said.”

“Mr Thomas says after investing he was expected to attend group calls lasting up to six hours with Lighthouse leader Paul Waugh.”

“Paul classifies people individually in terms of levels. If you are evolved, you move from level 1 to 4. ‘Only Paul is ever at level 4. Everyone else is broken, you’re wrong, and it became very, very transparent.”

More can be understood about these levels by reading this article here.

“The request prompted a message on November 11 last year, in which Mr Cooper blamed the decision on the ‘animosity and destructiveness’ of his wife towards the group. He added, if Lighthouse had to refund the cash ‘we would have to make a legal compensatory claim for that money’ from his wife ‘plus legal costs’. ‘Do we hold [your wife] accountable for that or you? Let us know because with your permission (in writing to our solicitors) we will hold her accountable by law.’ On November 24, Mr Cooper messaged to say no refund was possible and Lighthouse would be passing the content of Mr Thomas’s texts to their solicitor, whom he said would ‘act accordingly in connection with yourself as they have with others who have behaved unlawfully as you are behaving’.”

“One of his colleagues was already being mentored by one of Lighthouse’s leaders, Shaun Cooper, and so he did the same.”

“It was only after Mr Thomas became ill last year that he reflected on his involvement and with the encouragement of his wife decided to quit.”..“He says: ‘I went back to Lighthouse respectfully and said: ‘I would like to ask for my investment back.”

Come on Richard Thomas. Come out and hold me accountable toe to toes LIVE! Let’s do this! I pray for you and your family ..God Bless 🙏..

Richard Thomas.. I challenge you to a public discussion live? You have avoided me for years now! If you can’t handle me, you won’t be able to handle PhDs or anyone else superior to my intellect. Come please use me as practise! Love you Richard.. God bless! 🙏 x

READ OUR BREAKDOWN OF THE FULL DAILY MAIL ARTICLE HERE...

In December 2021, Mr Thomas set up (as the user u/Fagins_nemesis) and moderated a forum on Reddit designed to attack Lighthouse International Group. The people at Lighthouse have been targeted by racist attacks, religious hate and vile criminal insults from this very forum. There have been more than 2,900 harmful posts since February 2021 on Reddit Forums and other social media platforms like Twitter, LinkedIn and Quora. Below are just some examples, one where Mr Thomas even inadvertently admits he’s lying. More can be found here… 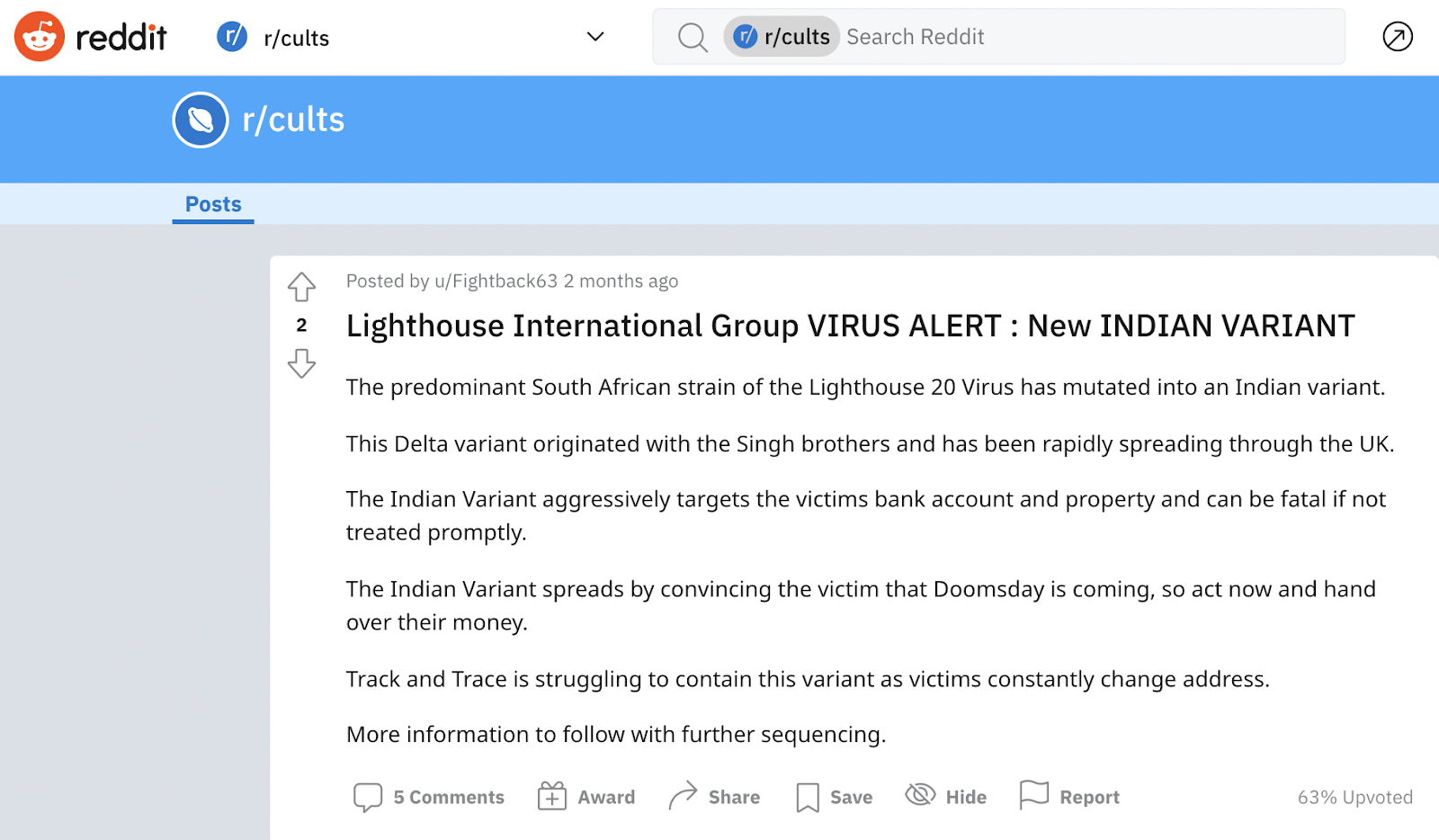 What we have aimed to do with this page is to show the reality and truth behind Richard Thomas’s involvement with Lighthouse International Group. Richard Thomas joined Lighthouse based on the premise of his growth in line with realising benevolent intentions which we wanted to support. We still want him to realise these! However, he was not willing or able to commit to his growth and development at the level required to fulfil these aspirations, so he looked for a way out that would absolve him of his responsibility. He later turned nasty when he didn’t get what he wanted. These were wants based on his terms rather than working with us to find win-win solutions.

He has since attacked us viciously online via Reddit and LinkedIn as well as through his instrumental role in the Daily Mail printing falsehoods about Lighthouse International Group and its partners. The intention is to destroy us and our reputation. The burden of proof lies with Richard Thomas to back up his accusations and we encourage him to take us to court if he truly believes he is right in his assertions. We will then be free to release the information that we hold to ensure that the truth is revealed and a fair conclusion is reached, unless he will grant us permission to do so beforehand.

Our ideal outcome, however, is for Richard Thomas to take responsibility for his actions; to apologise, make things right and in time to potentially help others to deal with their anger in relation to financial disputes like this one. We need more healthy growing adults capable of resolving disagreements rather than going online, anonymously or not, seeking to harm and destroy others for not acquiescing to unreasonable demands.  The choices we make as adults directly affect the safety, wellbeing and futures of our children. Mr Thomas has children of his own and we hope he makes wiser choices for his family’s sake, and for the sake of other children at the mercy of online abuse.

If you or someone you know has been a victim of defamation and or harassment online please get in touch with us via our contact page. We would love to hear from you and help with advice from our own experiences where we can.

Whatever begins in anger and hatred ends in shame… Benjamin Franklin.. speaks to malicious, hateful and destructive online constructive saboteurs and rabid group dogpilers long after his death. Lighthouse Saboteurs are now learning this the hard way. Hatred makes you stupid 🙏

READ OUR BREAKDOWN OF THE FULL DAILY MAIL ARTICLE HERE... 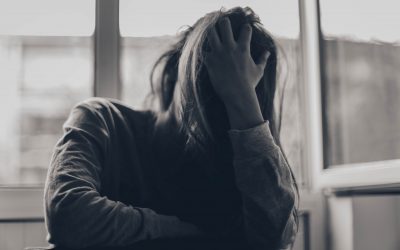 If you’d like to be involved in a campaign to hold the press accountable or would value support protecting yourself or your organisation, then get in touch with us.